Access Ruby Docs from the OS X Dictionary and Spotlight

Priit Haamer is an Estonia-based Ruby developer who has put together a "Ruby dictionary for Mac OS X." All you have to do is download the file he provides, unzip it into your ~/Library/Dictionaries folder (or create that folder and unzip it in there) and you'll be able to use the built-in OS X "Dictionary" application to search for Ruby module names, classes, and methods.

It is also possible to have Spotlight bring up entries from this dictionary too by going in to Dictionary's preferences and dragging the new Ruby dictionary to the top of the priority list. If you have turned off the Dictionary option in Spotlight, you'd need to turn that back on too. 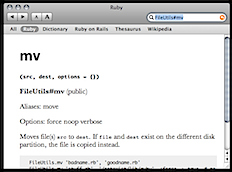 The documentation Priit has used appears to be 1.9.1's (Update: Priit claims it's 1.8.6, but mine includes String#each_char which isn't in my 1.8.6..). It has some flaws in that navigating from a method back up to a class is tricky, but it's a promising start, and Priit says he'll open source the code he used to produce the dictionaries in due course. He has also produced a Rails dictionary that works in the same way.