Bus Scheme: A Scheme Interpreter Written In Ruby (And Sometimes On A Bus) 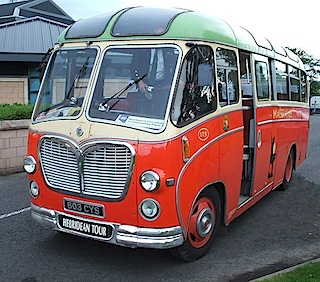 Bus Scheme is an implementation of the Scheme programming language (a dialect of Lisp) in Ruby being developed by Phil Hagelberg. It's called "Bus" Scheme because it's being developed while Phil travels on the bus, but Ryan Davis called Phil out on that sly fabrication! Curiously, Phil claims to have never used any existing Scheme implementations, relying instead on knowledge gleaned from SICP and these incredible computer science lectures (if you have not seen the Abelson / Sussman lectures yet, you are missing a major programming treat.)

Bus Scheme runs on Ruby 1.8, 1.9 and Rubinius, and the repository (where you can view the source without downloading it) is available here at GitHub, although as noted in the documentation, you can also use gem install bus-scheme

Meanwhile, in a land far, far, away Jim Weirich is working on an implementation of Lisp within Ruby too, although Jim's clever attempt uses Ruby pre-existing data structures and not a typical parsing and interpretation system.