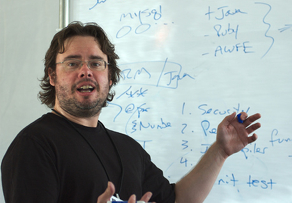 John Lam, a Foocamp attendee, reports that Steve Yegge gave a presentation called "Google Rails Clone" that looks into a JavaScript clone of Rails developed at Google. I can't find any other references yet, and John only mentions the basics, but if this is all true, it could eventually become a big deal.. especially if Google open sources it and JavaScript does become the "next big language".

It does sound rather unlikely that Yegge ported the entirety of Rails to JavaScript entirely by himself (although he is a coding god, and one of my own computer science heroes) but I'm guessing more news will leak out of the big G in the near future..