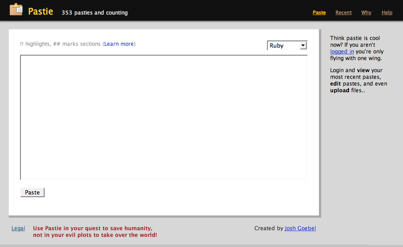 Pastie is a new code pasting system developed by Josh Goebel. It has a 37signals type quality to it. It's clean, quick, and does just what it says it'll do. It colors your code and is just generally slick, pretty, and a fine piece of work. Josh also claims it's less than 200 lines of Rails. Let's hope the source gets released!