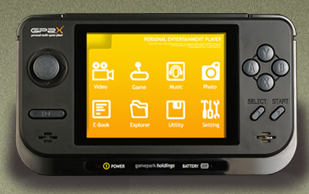 The GP2X is a Linux based handheld games console that's based on open source technologies. It's commonly used for running emulators to play games from older systems, but is also a powerful device in its own right (it features a 200MHz ARM processor).

Fujeyla-Studio has put together a statically compiled Ruby interpreter along with the RubyGame SDL extension for the GP2X, making it easy to develop games for the handheld. I don't have a GP2X but the source code I saw within the package looks like standard RubyGame fare. Might have to look into getting one of these devices!