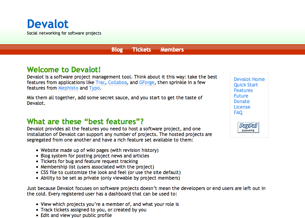 Devalot is a new software project management tool developed in Rails, in a similar vein to Collaboa, developed by Peter Jones of pmade inc. Devalot offers some exciting features for software project sites with wiki features built in, a blog system, ticketing, and more. It's free, and there's more information about the official Devalot site. I caught up with Peter for a quick chat about his motivations and where Devalot fits in with other, established systems.

Ruby Inside: What was your motivation for developing Devalot? Weren't existing solutions good enough?

Peter Jones: I'd love to say that I'm breaking new ground here, or solving new problems, but you're actually looking at a classic case of hubris. Over the last several years I've spent a lot of time trying on various bug tracking systems, but nothing ever seemed to fit right. What I've really wanted all these years is something with content management and bug tracking features, but nothing even came close, that is, until Trac came on the scene.

Trac looked like a silver bullet, but then I tried to install it. Needless to say, a few hours later I decided Trac wasn't for me. I had already experimented with Collaboa, and decided that since it was written using Ruby on Rails, I could help the project along. That had its own bag of problems, and so I decided to start from scratch.

What is your background with Ruby and Rails? And programming, in general?

Does Logo count as programming? Let's just say I started when I was a kid and haven't looked back since. I've used a lot of languages over the years, and until Ruby came along, I mostly relied on C++ and Perl. Then, like a lot of people, I heard about Ruby from a friend and instantly fell in love with it. When Rails was announced it was like a magical coincidence because I was preparing to rewrite a web application for work. A handful of Rails applications later, I still love Ruby (and keep C++ as my mistress).

Who do you see as the ideal users for Devalot? Who should immediately be installing and using Devalot for their project?

Anyone hosting multiple open source projects with Trac or Collaboa, while at the same time using blogging software like Typo or Mephisto, should take a look at Devalot. I also think that Devalot is going to be really helpful for corporate development teams, especially teams that want to have an internal development portal.

Personally, I'm using Devalot to not only host my open source projects, but to also collaborate with my clients. For each of my clients I have a private project set up for information exchange, news, and ticketing. So far, it's working very well in that capacity.

Do you see Devalot as an extra system running alongside tools like Trac or Collaboa, or would you expect it to replace them entirely?

Devalot's goal is to be a superset of Trac and Collaboa. I'd expect that if you like Devalot, you'll want to use it as a replacement for existing bug tracking systems.

What can we expect next from you?

During the process of creating Devalot I actually wrote a few Rails plugins. I'll be announcing those shortly. Beyond that, I'd like to raise some funding to spend more time working on Devalot.