Getting Started With Rails 2.0

Craig Webster has put together a tutorial called Getting Started With Rails 2.0 that does pretty much what it says in the title. Craig demonstrates how to start a project, get it up and running, use version control, put your project into a Git repository, and create models, views and controllers. Craig is also involved with the charity tutorial day at Scotland on Rails on April 3rd.

Carlos Brando has developed a Rails plugin that enables you to add "aliases for your routes." This is useful, he says, if you're developing a Rails application targeting a non English-speaking market and want to have the URLs appear in the native language. 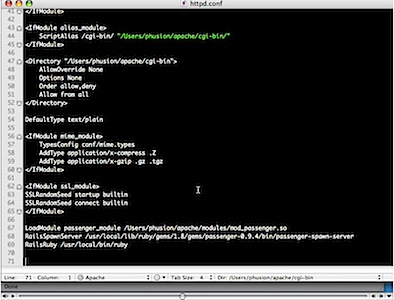 A Dutch company called Phusion has been working on a product called Passenger, which they are dubbing as being an attempt at a "mod_rails." It seems to be early days, and you can't get hold of the technology yet, but in their screencast they demonstrate how you can install their Apache module and then have Rails applications up and running within minutes. Hopefully it'll be open source (to some level or another) and customizable to support non Rails applications (Merb apps, for example), in which case it might be able to replace SwitchPipe, which is hosting all of my Ruby-powered apps now :)

Obie Fernandez has a go at putting together a list of "big name companies" who are using Ruby on Rails. There are also quite a few comments with other suggestions. This list could come in handy if you need to convince a client of Rails' popularity in the "enterprise."

Rather incredibly, Gartner, one of the world's biggest information and technology research firms, speculates that by 2013 there will be approximately 4 million Rails developers. Wow!

Brendan Lim has put together a Rails plugin called SMS Fu that makes it ridiculously easy to send text messages to US-based cellphones from your Rails applications.

A Quick Look at UltraSphinx

James Golick has put together a quick guide to the Ultrasphinx search plugin for Rails.