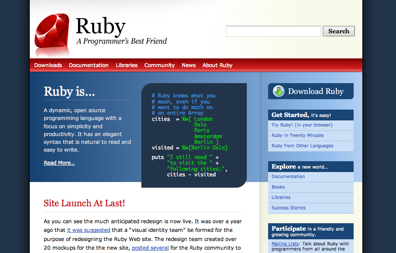 A few readers have e-mailed in pointing out the new official Ruby site's design. It's a great bit of work, but I tend not to post about things that everyone's almost certainly read somewhere else, and I linked to a preview of the new design some time back. However, I just noticed they've mentioned Ruby Inside as one of only four Ruby 'blogs of note'. As a thanks for this great honor, I realized I should probably post about the site, so go enjoy it.