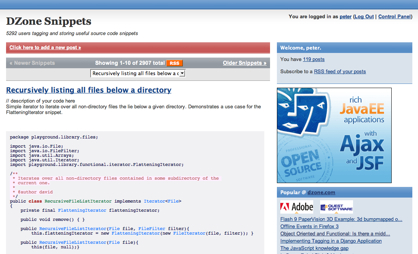 Last week I sold Code Snippets to DZone (known as the "Digg for developers" and providers of Ruby Inside's "Latest Ruby Links" sidebar). I have not heard of many Rails powered sites selling, so I thought I'd throw out my own story of how it happened.

Code Snippets dates from early 2005 when I'd only been using Rails for a little while. I saw a video made by Sam Stephenson demonstrating an as-then unreleased content tagging system and as the code wasn't available it inspired me to create a tagging and storage site for bits of code. Short of time, I knocked up Snippets in two days, and got to experience Rails' ultra-fast prototyping abilities (and this was before plugins for doing tagging or authentication!). A few months later I spent a few more days sprucing it up with a nicer design and a few bug fixes, but since mid 2005 it has remained virtually untouched. This made for many amusing moments in the transfer to DZone. I got it working on Rails 1.2 and fixed some of the worst problems, but the code is still heavily entrenched with Rails 0.11 mannerisms. Luckily DZone has a great team and they'll be bringing it up to speed over the coming months as they integrate it into their network of sites.

The site has now almost reached 3000 snippets in total, in all manner of languages from Ruby to C, Python to Java, and even obscure languages like REBOL. 5000 users are registered on the site, and it gets about 10-11,000 visitors per day, mostly from Google searches. It has survived with little maintenance this whole time, and was still running on FastCGI with no caching until I transferred it to DZone.

I wasn't really in the market to sell Code Snippets, but while talking on the phone with a friend, he mentioned he might be interested. I gave it some thought and thought his offer was pretty good. Before saying 'yes', I decided to do some research with a few other contacts to see if I could get a better offer. Quick as a flash, Rick Ross at DZone got me on the phone and agreed a sale within minutes. It is easy to see how well it integrates with their stuff, so I think we're both happy!

Even though DZone has taken Snippets over, we've worked together to ensure links to the old URLs will still work okay. Ruby Inside often links to snippets from the site, and these will continue to work. I do recommend that people continue to sign up and post to DZone Snippets as I'm often coming across useful, new bits of code on there, especially in the Ruby and Rails sections.