Rak: A Ruby replacement for “grep” 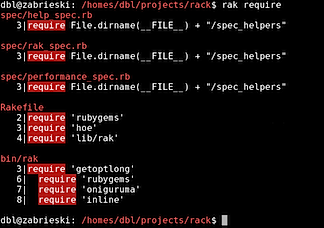 Rak, by Daniel Lucraft, is billed as a "grep replacement in pure Ruby." Even though it's a reasonably generic system tool simply written in Ruby, it actually has a bunch of features that are useful to Ruby and Rails developers specifically. It'll ignore the .svn, .cvs and pkg directories that might be present in your projects. It uses ANSI to give color highlighted output (as seen in the screenshot above). It also accepts Ruby syntax regular expressions and even lets you perform basic Ruby operations on the displayed output. There are a bunch of examples at the official Rak site.