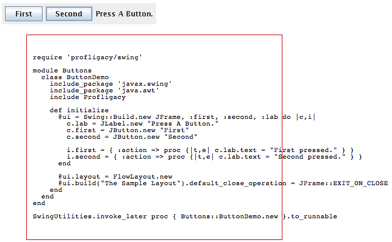 Profligacy is a new library by *** ****, the mastermind behind Mongrel:

Profligacy is a JRuby library that makes building Swing Graphical User Interface much easier than with raw code. It’s not a builder as with many other projects, but instead a simple Ruby way to structure the UI for the 80% common cases you’ll encounter.

Profligacy features some clever magic, such as LEL, a "Layout Expression Language" that lets you build layouts from basic ASCII representations.

Check out the official homepage and look at a whole collection of examples *** has put together (as seen in the screenshot above).