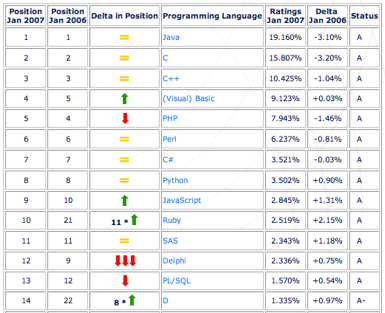 The well respected TIOBE programming language index has Ruby placed at #10 for January 2007, up from #21 in January 2006. Ruby has climbed steadily throughout the year and its rapid growth has earned it TIOBE's award of "Programming Language Of 2006". Ruby is now hot on the heels of JavaScript, Python, C#, and Perl on the index, and if things carry on as they have, Python might see itself below Ruby by next year.

We are glad to announce that Ruby has become "Programming Language of the Year 2006". Ruby has the highest popularity increase in a year of all programming languages (+2.15%). Runner up this year is JavaScript with +1.31%. Both languages are boosted by their corresponding frameworks, Ruby On Rails and Ajax. This might be a new trend. In the recent past it was necessary to have a large company behind the language to get it in the spotlight (Sun with Java, Microsoft with C#), but nowadays a killer app appears to be sufficient. Viral marketing via the Internet works!