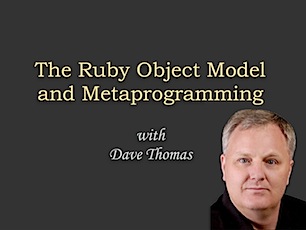 Disclaimer: I have no financial connection to the Pragmatic Programmers and other than through receiving these videos to review get no direct benefit from this review.

It was only a few weeks ago I announced that the Pragmatic Programmers were getting into the screencasting business. The first Ruby related videos were from the Everyday Active Record series by Ryan Bates. The reaction to these across the Ruby blogosphere has been very positive, and true to their word, the Pragmatics have been quick to release some more interesting videos. The latest addition is the Ruby Object Model and Metaprogramming series by Dave Thomas (of Pickaxe fame). Three episodes are available so far, respectively "Objects and Classes," "Sharing Behavior," and "Dynamic Code." They cost $5 each and clock in at around half an hour each.

With the first episode, Dave starts off at a basic level by covering the history of object-oriented development and taking a look at the core elements of what makes up the object-oriented programming style. He moves on to looking at Ruby specific concerns, metaclasses/eigenclasses, anonymous classes, singleton methods, and the like. He manages to keep things at a level that's immediately accessible to beginners (lots of diagrams are presented to illustrate concepts and relationships between objects and classes) but isn't afraid to introduce more complex examples straight after. This is a common pattern throughout each of the screencasts, the contents of which are covered here.

I'd recommend these videos to anyone who wants to quickly get up to speed with the concepts involving classes, objects, and metaprogramming. I don't believe Dave Thomas has done any screencasting before, but he comes across as a natural. His voice is engaging, eager, and authoritative, which makes the videos very easy to follow without drifting off. Certainly, these screencasts are a superb alternative to the explanations of classes, objects and metaprogramming in most Ruby books. If you're still unsure, Dave gives a quick 3 minute introduction to the series (video).

Elsewhere: Antonio Cangiano has also reviewed these videos. Check out his review for a slightly different perspective.

Post supported by Ruby Hoedown: Come on down to the south for the Ruby Hoedown, the South's regional Ruby conference! Submit a talk now or sign up for registration at $199. The first 50 people to use the promo code IMINSIDE will get an additional $25 off the price!