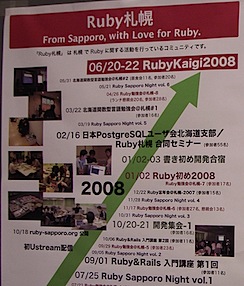 The online enterprise news publication InfoQ has covered the conference in two parts. The first features a mini interview with Matz, where he talks about the low adoption rate of Ruby in the enterprise and the role of certifications in the Ruby world. The second InfoQ post reveals that Matz is preparing to "standardize" Ruby, with the ultimate aim to submit a Ruby standard to the ISO, and Koichi Sasada reveals that Ruby 1.9.1 (notable, as it will be the first officially stable / production-ready release of Ruby 1.9) is set to arrive this December.

A lot more seems to have gone down at RubyKaigi than this, as evidenced by the absolute snowstorm of links tagged rubykaigi on del.icio.us, though most of the evidence is in Japanese, of course.