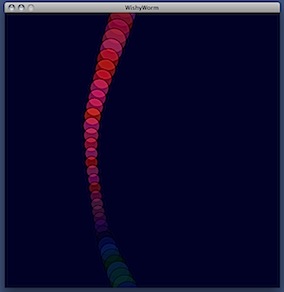 Processing is a popular, open source graphics framework and programming language. It's used by thousands of artists, researchers, and students to put together graphics-focused applications, art, and other visual experiments. It's like a more powerful NodeBox, if you're familiar with that project.

Processing typically relies on scripts written in Java, but now, thanks to JRuby, it's possible to interact with the Processing framework directly from regular Ruby code. You're going to need a fully working JRuby installation for this, and it seems to have only been tested on OS X (which I've also tested it on - it works well!), but the interface code, along with two examples, are available at The Shoebox. If you want to put together quirky art apps, graphical experiments, or just doodle around, it's well worth trying.

(Many thanks to John Weir - who was, at one time, working on something similar called Dynamite - for the pointer to this new project.)