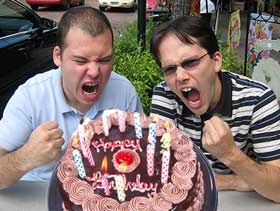 It was a year ago that the Rails Envy podcast was born. Run by the now infamous Jason Seifer and Gregg Pollack, Rails Envy has been entertaining and informing us with Rails (and some Ruby) news since October 2007, and they've become almost household names in the Ruby community and on the conference circuit. If you weren't reading Ruby Inside a year ago, check them out - it's an entertaining way to get a weekly Rails news fix.

I decided to ask the guys a few irreverent questions to see how their year has gone:

So guys, what's the most surprising bit of news you've reported over the last year?

Jason: The most surprising bit of news in the last year was definitely about MagLev. It seemed like, out of nowhere, suddenly there was the Ruby interpreter that was incredibly fast and scalable with an OODB and all sorts of great features. It made sense -- they already had GemStone and Ruby and Smalltalk are so similar. We haven't heard much about it since that RailsConf demo but I'm excited to see what happens.

Gregg: The "We ain't got no RSpec" voicemail we got earlier this year was in my opinion one of the funniest moments on the podcast, and putting together the remix for it, well, that was just icing on the cake.

Jason: It's a toss-up for me. My first choice would be the voicemail from R. Elliot Mason that Gregg talked about. The second would be the TechCrunch article by Nik Cubrilovic where he rehashes every single false rumor about Rails in one post. I thought that was funny because he was quite obviously trying to steal my "Rails can't scale" shtick but I'm not quite sure if he realized I was joking. Yeah, I went there.

So does Rails scale?

Gregg: In the mind of Jason Seifer, no. Everywhere else yes. I guess that means Jason can't scale.

Jason: I've done an in depth study on this and published the results at http://canrailsscale.com.

Why should people listen to Rails Envy anyway?

Jason: To put it quite simply: it's the greatest programming podcast in the world. We keep up with all of the RSS feeds and Ruby (and Rails) news so that people can just catch up once a week. More signal, less noise. We want to keep doing the podcast as well as EnvyCasts for a long time.