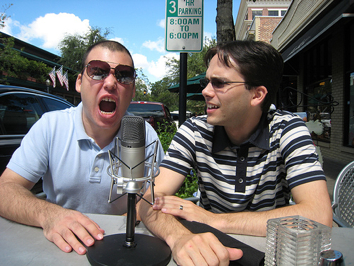 "Those Rails Envy guys from the Rails Vs Whatever commercials" are back again with a new project. Called, simply, the Rails Envy Podcast, Jason Seifer and Gregg Pollack discuss the weekly happenings in the Rails world. Taking the completely opposite approach to the Rails Podcast, with its interviews and indepth discussions, the Rails Envy Podcast flies through Rails' headline news in just several minutes. They're already on episode 2 and are publishing a new episode each Tuesday. The Pragmatic Studio sponsors the show.

As an aside, they're also selling all of the Rails vs Whatever commercials on DVD and also have a new Rails vs .NET commercial to show.