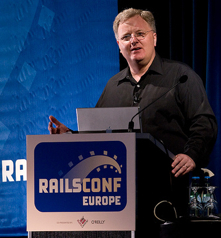 The European variety of the popular RailsConf Rails Conference is currently in full swing in Berlin, Germany, and runs until the end of this Wednesday, September 19. But for those of us who prefer to watch Yanni concerts on DVD from the comfort of our couch rather than from the ear-pounding front row, some attendees have been uploading photos and blog posts about the event so far.

An announcement about the Reject Conf tonight (September 18) in Berlin. The Reject Conf in Portland was supposedly a total blast, so check it out. It'll feature some of the talks that didn't make the list for RailsConf proper.

The "RailsConfEurope" tag on Flickr is buzzing with the latest photos (including the one used on this post).

Robert Dempsey posts with a summary of Monday morning's tutorial session about Behavior Driven Development as led by David Chelimsky, Aslak Hellesoy, and Dan North. He also briefly mentions the "Flex on Rails" afternoon tutorial and provides a link to some supplied code.

The RailsOnWave guys also posted a video about arriving in Berlin a month early for the conference.

Curiously, very little else has been posted by anyone anywhere yet, so let's hope that means everyone's having too much fun!