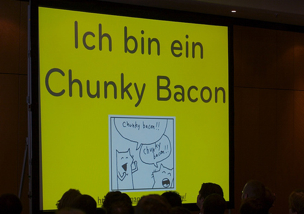 RailsConf Europe 2007 is over and it's time to wrap up. As before, there are oodles of pictures on Flickr with the "RailsConfEurope" tag (yah-boo to you miserable sods who don't use Creative Commons licenses for your photos) and DHH points to all of the presentations given at the conference (covering areas as wide as Ferret, REST, Adobe Flex, Amazon S3 and JRuby). Continuing from his fine coverage of Monday, the first day of the conference, Robert Dempsey succinctly wraps up the Tuesday morning and afternoon sessions, as well as the Wednesday morning sessions, and then Wednesday in its entirety. These are worth a read if you didn't go, as he provides some context missing elsewhere.

Last but not least, David Heinemeier Hansson's keynote. The King of Rails seemed to focus mostly on Rails 2.0, which will be more of an evolutionary step than a revolutionary one. Casper Fabricus has a superb writeup with many choice quotes and code examples, although Nick Sieger has done a good job too. On his own blog, however, the King decided to post his views of Sun's ever-growing support for Ruby and Rails and his ultimate satisfaction at the success of RailsConf in general.