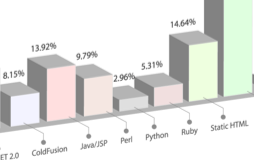 According to respondents Ruby is used as a development platform by 5.31%, well behind PHP's dominating 67.54% market penetration. However, when asked what platforms people were not currently developing for but planning to use in the next twelve months, Ruby was the answer of 24.37% of respondents!

Of more immediate interest to me is that Python only takes 2.96% of the vote and Perl has 9.79% of the vote. And in response to "What server platform(s) are you not developing for, but expect to in the next 12 months?" Ruby takes 24.37% of the vote in comparison to just 8.47% for Python. Things aren't looking good for Python amongst SitePoint's developers!