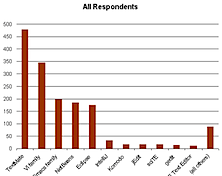 Tim Bray presents "Ruby Survey Results," the results of a survey of 1000 Ruby developers on their favorite development tools, primarily focusing on editors / IDEs. In the category of Rails-focused developers, 38% of the vote went to TextMate, with vi, NetBeans and Eclipse lagging far behind. With Ruby-focused developers, however, vi edged out TextMate by a single vote, with TextMate, Emacs and Netbeans as runners up. With all results tallied together, however, TextMate took a healthy lead on vi, and cements its position as the #1 preferred development tool of Ruby developers overall.