The Best of RubyFlow This Week 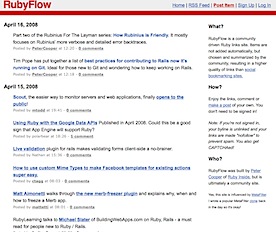 By all measures, the launch of RubyFlow, a new community-driven Ruby (and Rails) news site has been a success! We've had about 20,000 pageviews in the first week, and people whose sites have been getting linked on there have been reporting nice levels of traffic coming to their articles. We also have 1,500 subscribers to the main RSS feed, so there's a great audience for your posts.

Makoto Kuwata (of Erubis fame) has started a Japanese version of RubyFlow based on translations of the regular RubyFlow posts. Japanese Rubyists will find this useful on its own, but for RubyFlow posters it provides a way to have more exposure in the Japanese Ruby community.

One of RubyFlow's jobs is to act as a way for me to get leads for Ruby Inside stories and links, so if you have a particularly good Ruby library, blog post, article, tutorial, or other resource to announce, get it on RubyFlow, and it might make it to Ruby Inside too! Other than that, I plan to do regular roundups of the "best of RubyFlow" of which this is the first (this will probably replace the "Interesting Ruby Tidbits" series). So, without further ado:

FaceBook App In 8 Lines — Frankie which helps you create a "hello, world" Facebook application with just 8 lines of Ruby is now available. This blog post gives a good rundown of how it works.

Rice - C++ + Ruby — If you are writing binding C++ libraries to Ruby - check out Rice. It makes accessing C++ libraries from Ruby dead simple through clever use of C++ templating. It is similar to Boost.Python and provides an object-oriented interface to most of the Ruby C API.

Walkthrough of Ruby Reports — Gregory Brown and Michael Milner have written a great article / walkthrough of Ruport, the Ruby report generation library, for O'Reilly. It seems a pretty solid introduction for those not quite ready to buy the Ruport book.

Twitter Library — Twitter (Ruby library) is a Ruby library and command line client for the Twitter status / micromessaging social network. It's not the first Ruby Twitter library but it certainly looks clean and well written.

19 Ruby Template Engines — Vidar Hokstad presents mini reviews of 19 different Ruby-based templating engines. This is a surprisingly good round up.