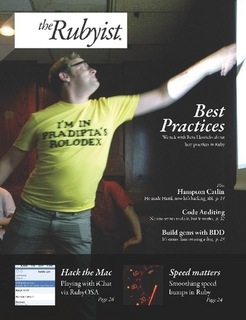 The Rubyist - not to be confused with the Japanese Rubyist Magazine - a new paper-and-PDF based magazine for Ruby developers has released its first issue. This is a significant milestone, since it was just over a year I lamented about how the blogosphere killed the enthusiasm for Ruby magazines. In response to that post, Jeremy McAnally announced his intention to produce a Ruby magazine, and now, with the advent of simple Print On Demand magazines from MagCloud, it has become a reality.

The first issue is available in print for the United States only and costs $8 plus postage. A PDF version is available for $3 from Lulu for those who prefer PDFs or are located outside of the US. Contents include interviews with Rein Henrichs and Hampton Catlin, articles from Jamie van Dyke, Ben Scofield and Yehuda Katz, some unbelievably good ads, and more. There's nothing particularly deep in the first issue, but for a first issue this is a remarkable effort and one I'd certainly recommend purchasing, even if only in PDF form.