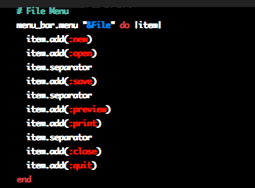 Anvil is a new Ruby framework for developing GUI applications by Lance Carlson. It's a framework around Wx::Ruby (WxWidgets is a popular cross-platform widget toolkit) and offers its own DSL to make developing GUI applications easy. The release blog post has more information, including a great example of the code required to make a basic Anvil app. Interestingly it supports an MVC style of development where the view and control elements of your applications can be separated cleanly.

The first Anvil-powered application is a Ruby based editor called Hamr. Lance is so far the main developer of the Anvil project but he's keen to get other people involved.