Beginning Ruby (and other Ruby books) at 50% Off! 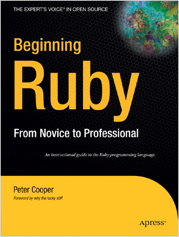 My publisher has just let me know that BookPool.com, a discount computer books store, is selling most Apress-published books at 50% off, so now Beginning Ruby is available for just $19.95 (compared to $28 on Amazon.com)! This also means you can get other Ruby and Rails books like Beginning Rails for $17.25, Practical Rails Social Networking Sites for $22.25 and Beginning Ruby on Rails E-Commerce for $17.25.

The Back Story..
Ruby Inside was created to be a promotional site for my then in development book, Beginning Ruby. Things turned out rather differently for Ruby Inside in the end but the book came out in March 2007 and has done reasonably well.

Beginning Ruby is the ideal beginner's book to the Ruby programming language and community. It's not necessarily for people who are entirely new to the idea of programming, but for people who are new to Ruby itself, or even the concepts of object oriented programming, it's an ideal start. I wrote the book because while the Pickaxe is a good reference, I found it a poor start to finish type instructional beginner's book (which, of course, it's not meant to be) and it doesn't cover topics like the community, how to get involved, Gem development and Rails. Beginning Ruby fills that beginner's gap and covers most major areas of developing Ruby programmers. Thousands of readers have given it a try so far (yielding some great reviews!), so if you or someone you know needs a beginner's Ruby book, give it a try now at just $19.95!