If any or all of these interest you, drop me an e-mail at rubyinside /-at-/ bigbold.com. Read More

Develop an OS X app in Ruby: An Epic Walkthrough

Expat is the recognized big daddy of XML parsing. It’s a stream-based XML parser written in C and, as a library, is used for XML parsing functions by many languages. Rubyists have tended towards REXML, however, a more flexible (though infinitely slower) parser. Sam Ruby, however, has come up with some techniques to get Ruby’s REXML working with Expat. Read More

I’ve joined forces with Obie Fernandez on the Ruby section at InfoQ, a prime news site for the enterprise software development community. The Ruby news at InfoQ has more of an enterprise feel to it than that here at RubyInside and is focused at team leaders, development managers, enterprise developers, etc, so there’s less hacking, but more high-level Ruby stuff.

For those who are morbidly curious about such things, my ugly mug is now alongside Obie’s at the About InfoQ page (along with lots of useful info about InfoQ’s unique features, if you haven’t seen the site before). Read More

“The Ruby Conspiracy” : July’s Troll Of The Month

It’s time to bring in a regular feature.. Troll Of The Month. Every month or so there appears to be a new article circulating that explains why ‘Ruby sucks’ or why you shouldn’t use Rails to develop serious applications. Most of the time, they’re unbalanced and poor explained, even if the author has some valid points.

This month’s TOTM is “The Ruby Conspiracy” by Greg Luck. His heart seems to be in the right place, but it just seems like an opportunity to bash Ruby. Read More

Using RubyInline to Speed Up Code By 10x

After writing a basic routine to print all prime numbers between 1 and 10,000 in Ruby, Pat Eyler found it took almost 3 seconds to complete, and seeked out a way to make it faster. Enter RubyInline (covered previous at RubyInside).. With RubyInline he added a basic C function into the Ruby mix and knocked down the time required to 0.3 seconds.

Embed Lisp into Ruby with RLisp

Tomasz Węgrzanowski (aka Taw) has developed a Lisp interpreter embedded in Ruby called RLisp. It’s early days and ultra-alpha-quality, but it’s a cool project. You can find the source code here, and Taw is offering free beer for the first 10 developers to write a cool RLisp program. RLisp already has some basic OO support (and even HTTP support) so it’s fun to play with. Read More

Ruby gets a new (and good!) UTF-8 library

_why announces a release of a new UTF-8 library (which adds UTF-8 support to Ruby, without using KCODE) by Nikolai Weibull. _why has also packaged it up (unofficially) into a gem to make it even easier to install (not all of us use git). Here’s some demonstration code: Read More 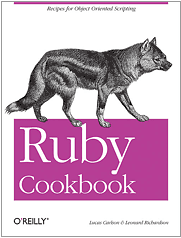 O’Reilly have released the long awaited Ruby Cookbook by Lucas Carlson and Leonard Richardson, a 906 page bonanza of Ruby recipes, tips and tricks. The Perl Cookbook was an essential book for Perl programmers, and it looks like the Ruby Cookbook could become similarly important in the Ruby world.

(You might want to try the trick of using the coupon code DSUG to get 30% off again – as worked with the recent O’Reilly RJS book, if it’s still valid..) Read More

Scott Laird has announced the release of Typo 4.0, the first release of the original Rails powered blogging tool this year:

I’d like to announce the release of Typo 4.0.0, the latest version of the most widely-used Ruby-based blogging software. This is the first official release of Typo 4.0, and the product of almost a year’s work by the Typo team. This is a huge upgrade over the previous Typo release, version 2.6.0. You can download it from Rubyforge, or you can use the new Typo .gem and installer.

Typo appears to have lost some mindshare in the Rails blogging community to Rick Olson’s Mephisto (the official Rails blog migrated to Mephisto just a month ago), but Typo has made a whole lot of changes and improvements (podcast support, file uploads, Jabber notification, better caching and themes support, redirection system for people migrating from other blogging tools, etc). Read More

The “Authorization plugin” is an interesting plugin for Ruby on Rails that provides role based authorization for your app. It’s particularly interesting because it includes some ‘English-like’ dynamic methods that can use the defined roles. For example, user.is_fan_of angelina and angelina.has_fans? where ‘fans’ are defined in the roles table. Also look at the code example in the graphic above.

You can also do things like user.is_eligible_for_what (returns an array of authorized objects on which the user has the ‘eligibile’ role) and user.is_moderator_of?(group) (returning true or false if the user has the moderator role upon group). Powerful stuff!

The latest version was released just a few days ago so it should all be ready for full Rails 1.1 goodness. Read More 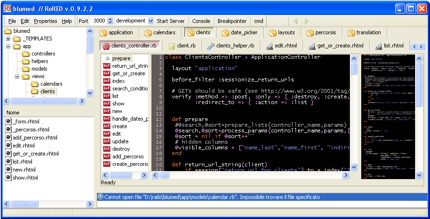 RoRED is a new Ruby / Rails IDE for Windows by Marcus Oblak.

I don’t run Windows, but it appears to have easy hooks for the dev server, console, and breakpointer built in, as well as easy ways to navigate through methods and models. It also features macro recording and playback, bookmarking, persistent layouts, and Ruby and RHTML syntax highlighting. Read More

Refactoring a Rails app to be RESTful

Scott Raymond has written a useful article showing the thinking behind his refactoring of IconBuffet.com from an action-heavy URL scheme to a REST based URL scheme.
The application behind IconBuffet.com, a royalty-free stock icon store, went from 10 controllers and 76 actions to 13 controllers that more closely followed the models involved, and 58 total actions. Most of the new actions are uniform and match to the new Rails methodology of mapping HTTP verbs (GET, PUT, POST, DELETE, etc.) to Rails controller actions. You can learn more about this structure from David Heinemeier Hansson’s slides (PDF) from RailsConf, or watch the video of his keynote presentation. Read More

Juggernaut: Real-time socket connection between your Rails views and your app 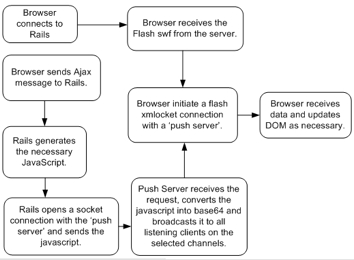 Alex MacCraw has been working on a great plugin called Juggernaut, and has now made his first public release:

The Juggernaut plugin for Ruby on Rails aims to revolutionize your Rails app by letting the server initiate a connection and push data to the client. In other words your app can have a real time connection to the server with the advantage of instant updates. Although the obvious use of this is for chat, the most exciting prospect is collaborative cms and wikis.

Basically, your view will contain a hidden piece of Flash that opens up a socket connection to a socket server that your Rails app can then interact with. Read More