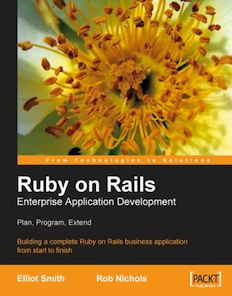 I was kindly sent a copy of Ruby on Rails Enterprise Application Development (or amazon.com link) by Elliot Smith and Roch Nichols by publisher Packt. As the authors are both British and the leading author is called Elliot Smith (close enough to the name of my favorite recording artist) I felt compelled to give it a look over and mention it here.

The book states that it's aimed at corporate developers who already have a rudimentary knowledge of Rails but who want to move on to building a full-scale application with a view to deployment within the enterprise. Despite this, the book still covers some of the basics like installing Rails, creating a new application, getting an IDE, installing a database engine, and so forth, although there seem to be rather random expectations that you already know certain things about Ruby further on.

An interesting concept used in this book is an underlying narrative based around a fictional company that has various problems that can be solved using Ruby on Rails. It forms the basis of a chatty, friendly, but ultimately pragmatic approach that permeates the book. The narrative also enables the authors to guide readers through an "enterprise" problem in the way that developers at such an enterprise would approach it, which takes the book far out of the realm of dry, reference material, and into practical, hand-held, tutorial land.

In short, I really like this book and I think it's an excellent place for developers within a corporate environment (as opposed to independent developers) to start. Unfortunately, however, it also suffers from the breakneck speed that Rails is advancing at, as it squarely focuses on techniques used with the Rails 1.0.x, 1.1.x and 1.2.x revisions, with no coverage of formats, REST, and all the various Rails 2.0 goodies. I don't consider this a major failing, however, as this is a great book to bridge the gaping chasm between, say, Agile Web Development with Rails and The Rails Way, and it is perfectly tailored to its market.