Using YSlow to Improve The Performance of Rails Sites 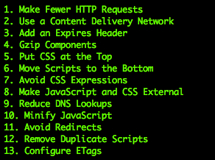 Ben Smith takes a look at using the YSlow Firefox plugin to improve the performance of Rails-powered sites. He shows how to tweak Rails applications (and even Nginx) to satisfy some of YSlow's recommendations. Even though he doesn't go into much depth, it's a good post if it helps raise the awareness of YSlow in the Rails community. As I've been forced to use dialup and mobile Internet lately (and the trend will continue for others with the iPhone, etc) I've become acutely aware of the performance differences between well developed and poorly developed sites!