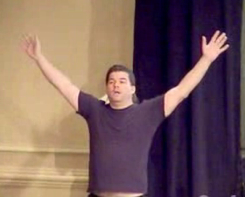 Just learned via Michael Riley on Twitter that the videos from the 4th RejectConf held alongside RubyConf 2007 are available to watch online. There are plenty of good presentations to watch, such as Dr. Nic Williams' introduction to Rubigen and Magic Controller, Tom Preston talking about GOD, and Eric Mills on rubedo - a Ruby powered jukebox. There are 20 different presentations you can watch (including Ryan Davis' introduction) so there's bound to be something you'll find interesting. Being RubyConf's RejectConf, the presentations are nearly all about Ruby-specific topics, rather than Rails.