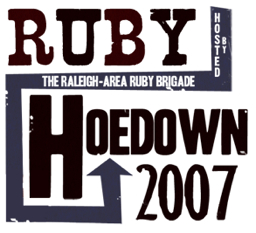 The Ruby Hoedown was a North Carolina based Ruby conference that took place on August 10-11, 2007. From all accounts, it was a roaring success, and now the videos of the presentations given have been made available. Topics include:

All this along with some lightning talks and two keynotes by Bruce Tate and Marcel Molina. Enjoy!