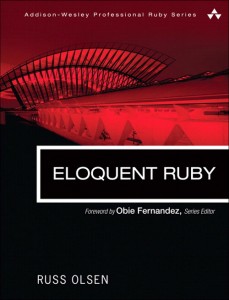 Eloquent Ruby (Amazon.com - print & Kindle) by Russ Olsen is the first Ruby book I've read in its entirety within 24 hours; it's that good. That may be all you need to know before you buy a copy at Amazon.com, Amazon.co.uk or read it on Safari (if you have an account). If you want to learn more though, keep reading.

What Is "Eloquent Ruby"?

Eloquent Ruby is a book published by Addison Wesley and written by Russ Olsen (who also wrote Design Patterns in Ruby a few years ago). It clocks in at around 400 pages and has 31 chapters clocking in at around a punchy 10 pages each. Each chapter is titled as a guideline you should follow to write "eloquent" Ruby - things like Create Classes That Understand Equality and Write Code That Looks Like Ruby - and typically the claim is explained, some code examples shown and discussed, some real world examples pointed to, and that's it.

As with Design Patterns in Ruby, Russ adopts a chatty, familiar tone. Reading this book is like reading a book specifically written for you by a friend. He doesn't shoot off on many unnecessary tangents and he keeps the stories short and sweet but this book certainly couldn't be called dry.

The book is also notably short of egregious errors or omissions. Even when I don't read something with a fine-toothed comb on standby, I can usually pick out a laundry list of factual and grammatical errors or omissions (as both Obie Fernandez and my wife will attest) but Eloquent Ruby gave me little to chew on. I can only bring to mind a few spacing and formatting issues and only one true "error": a > instead of a < in a class definition on a single example.

Russ tries to remain neutral with his choice of Ruby implementations but the book seems to focus primarily on Ruby 1.9 (Ruby 1.9.1 specifically but that's just due to when he wrote it) while providing useful footnotes in the cases where there are differences to Ruby 1.8. No matter what Ruby implementation you're using, there's little to confuse you as most of it is very non-implementation and non-version specific.

I wholeheartedly recommend this book to anyone except those who, well, could have written a similar book themselves. The short punchy chapters make it a delight to read and gives the option of reading it merely 10 minutes at a time before bed or similar. The short chapters also make it useful as a reference if you forget how to do a certain thing like, say, use method_missing, even though it's not put together as a reference book at all. Lastly, this book is a must read if you're not confident with Ruby idioms and the best way to structure and lay out your code - Russ's approaches reinforce the current "standard" way to write Ruby and this alone is worth the price of admission.

Who Should Buy It?

Who Shouldn't Buy It?

The chapter titles in Eloquent Ruby are useful enough to give you an indication of the level(s) it aims at and whether it would be interesting to you, so here goes:

There's something for everyone and it gets progressively more advanced.

How to Get Eloquent Ruby

If you want a print or Kindle copy, head to Amazon.com, Amazon.co.uk, or your other favorite book retailer. If a PDF or EPUB file is more to your taste, InformIT has those for sale (currently for $28.79).