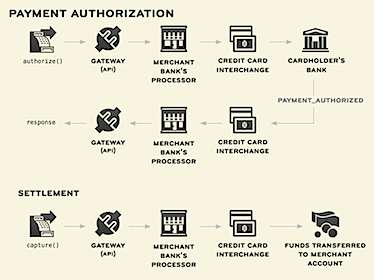 ActiveMerchant is a new e-book written by Cody Fauser and produced by Geoffrey Grosenbach's PeepCode which, unsurprisingly, is about the Active Merchant Ruby library and Rails plugin (past Ruby Inside reference). Cody Fauser is a key developer on the Active Merchant project, so all the knowledge is from the "horse's mouth," as it were!

The Active Merchant library was initially developed as part of the Shopify e-commerce system, and is an excellent library for interacting with payment gateways from Ruby (and Rails) code. It's been in production use handling tens of thousands of payments since 2006 and it now has support for several payment gateways, including PayPal, Authorize.Net, and TrustCommerce.

Cody's e-book comes in PDF format and is immaculately produced with helpful diagrams, concise code snippets, and it proves incredibly easy to read on the screen while retaining the ability to give a good printed copy. At 74 pages it goes into just the right amount of detail, and at $9 is a bargain for anyone wanting to get involved with processing payments and dealing with payment gateways from Ruby or Rails applications (you'll hopefully make that back on your first couple of payments!)

Disclaimer: PeepCode is a Ruby Inside sponsor, but does not receive any special treatment regarding editorial posts such as this one. It truly is a good e-book!