David Heinemeier Hansson says No to Use of Rails Logo 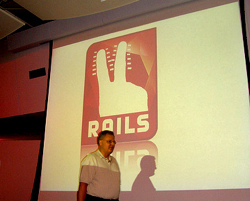 (credit: yarrg)
This morning, Pete Forde of Unspace prodded me to write about a new book, "Beginning Rails" by Jeffrey Allan Hardy and Cloves Carneiro Jr. (with Hampton Catlin). And, when I receive my copy from Apress, I will be reviewing it here. Of more immediate interest to me, however, was a note that David Heinemeier Hansson, the creator of Ruby of Rails, had denied the authors the right to use the Rails logo on the front of their book:

Jeff wanted the Rails logo on the cover of the book but was informed by Apress that David Heinemeier Hansson has been “politely resisting” permission to use the logo, and has said in the future, it will only appear on his books. (emphasis mine)

I got in touch with David to get his take. He responded very quickly (thanks David!) and also posted his full response here. The key points, again with emphasis mine:

The use of the logo is restricted as it always is when talking about a trademark. When the logo is used in a commercial setting, such as part of the promotion of a book, it legally requires that the trademark holder has been involved and stands behind the quality of the book. If that's not the case, you're on the way to lose your trademark.

So I only grant promotional use for products I'm directly involved with. Such as books that I've been part of the development process for or conferences where I have a say in the execution.

David went on to say that he doesn't want to become an arbitrator for use of the logo on books (because of the obvious impracticalities) and that despite the MIT license being applied to the Rails source code, it does not override the trademark restrictions on any graphics provided, such as rails.png. He finished:

While trademark arguments are new for the Rails world, they're familiar within the open source community as a whole, such as in the Debian vs Firefox dispute that resulted in a fork called IceWeasel. It's highly unlikely anyone will fork Rails merely to entirely open up its branding, however, but the message is clear: Don't use the Rails logo without DHH's approval.

One curiosity remains, however, in that not only is the Rails logo a trademark, but so is the word Rails (and the term "Ruby on Rails") itself. From rubyonrails.org:

"Rails", "Ruby on Rails", and the Rails logo are trademarks of David Heinemeier Hansson.

So, legal minds, could DHH use this trademark claim even to the word "Rails" (in its trademarked context) to shut down or force a rename on, say, other Rails conferences, books, or Web sites? If so, we might have something to worry about.

(Addition: Marten Veldthuis points out that the logo's development was funded by an early community effort. Forgot about that!)