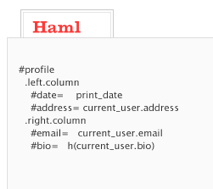 Ruby Inside has mentioned Haml, a couple of times before. It's a template language for Rails developed by Hampton Catlin, and it acts as a high-level, highly semantic alternative to RHTML. It relies on indentation for structure (a la Python) and includes a CSS meta-language (Sass) to make it super easy to dynamically produce XHTML-compliant pages that are easy to tweak later on.

Hampton has just released Haml 1.7, a major revision that boosts Haml's speed to merely 30% less than that of raw Erb (which RHTML templates rely on), which, supposedly, makes it 16 times faster than Markaby, another alternative page generation library. Hampton also says that they're planning for Haml to be faster than standard Erb by Haml 2.0.

Check out the official Haml site, there's lots of examples, and it's really easy to get up and running with it. If you haven't considered an alternative to standard Rails templates before, now's a good time to check it out.