RubyAMP is a TextMate bundle that goes above and beyond the typical TextMate bundle in usefulness. It adds auto-complete from all open tabs, easy jumping to methods and classes, improved RSpect debugging support, breakpoint support (set and remove from TextMate), Merb / Rails server or console launching, development log tailing, and a lot more. There's a screencast on the project page itself so you can get a direct look at how it all works within a minute or two. 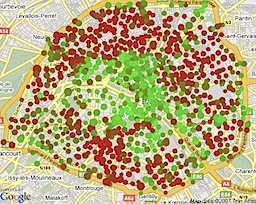 Paris has a shared bicycle scheme for those who want to get around downtown called Velib. Ardent Velib fan Thibaut Barrère decided he wanted a better way to see the availability of bikes, and put together a Ruby app that could scrape the raw data and put together a visualization for him. This is a well written article covering how he did it from start to finish.

When a press release is so concise and well written (a VERY rare event), it seems a shame not to quote it verbatim:

Engine Yard, provider of the leading Ruby and Rails deployment platform, today announced a series of Hackfests, informal community events open to Ruby developers, where sharing, learning, and hacking rule. The inaugural Hackfest was a resounding success with participation from over 100 top Ruby and Rails developers. Two more Engine Yard Hackfests are planned for the coming months.

The first event was held this past weekend alongside MountainWest RubyConf 2008 in Salt Lake City, Ut., where Engine Yard’s Ezra Zygmuntowicz and Evan Phoenix shared the opening keynote. After the conference, folks generally look to talk tech, shoot the breeze, and hack. They split off into small groups, grab dinner, and eventually end up in various hotel rooms, awake into the wee hours.

The Engine Yard Hackfest aimed to draw these small groups together, and facilitate a mid-sized, casual, expert meeting of the minds. As an alterative to having Rubyists chat in the brief windows between conference sessions, the Hackfest offered an open-all-night comfortable workspace, with free wi-fi, dinner and snacks, and expert community leaders for company.

Rubyists are invited to participate in Engine Yard’s upcoming Hackfests, which will be held alongside GoRuCo in New York (April 26) and RubyFringe in Toronto (July 18-20).

I hear that the similar "Ruby Cave" events at the recent Ruby Fools conferences went down well, so this is a great development for those going to GoRuCo and RubyFringe.

ServiceReg is a new service by Chris Matthieu (of Wuby fame) that acts as an API to other RESTful APIs. Confused? Perhaps this example URL will give you an idea:

Still don't get it? Thankfully Chris has put together a screencast to bring us all up to speed. ServiceReg appears to be useful for accessing third party RESTful APIs entirely through a well crafted URL to ServiceReg (without the need to send XML payloads, etc.)

Ruby's Not Ready! (Or: Why Python Rules and Ruby Sucks)

A Python developer takes Ruby, rips it apart, and explains in 6000+ words why Ruby sucks compared to Python. It's a ballsy essay, and if it were a lot shorter and not as well written, I'd be calling it Troll Of The Month. As it is, I think he's missing the point a lot of the time (he tends to think Python's better because he likes its conventions more than Ruby's - not a compelling argument), but it's an interesting read none the less. Anything that keeps our minds open to the fact that Ruby != perfection is worth a look.