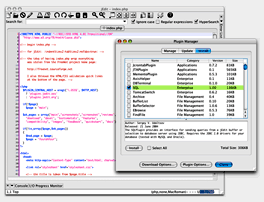 Jim Morris declares that jEdit could be "Textmate for the rest of us". jEdit will be familiar to many developers as a language agnostic IDE created with Java (though significantly less bulky than Eclipse!), but even I was surprised to hear this:

Yes JEdit actually has intellisense-like completion for Ruby. A previous blog entry of mine explained how I tried Komodo to get this, but it was not very good, however the JEdit version found in the latest RubyPlugin, works pretty well, I think it uses parsing from the JRuby project, so no surprise it works.

Morris continues to explain how he has developed macros for jEdit to replicate numerous TextMate features, such as expanding # to #{} when typing within a string and points to other macros to get a TextMate-like experience for free.

Quickly following up on that bumper post, just a few days ago Morris released a large collection of Ruby "Snippets" that you can use easily from within jEdit. Sterling work, and yet another great option for Ruby developers looking for an IDE.

(Thanks to Charles Roper for the lead)