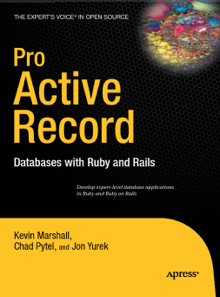 Pro ActiveRecord (previously known as "Pro ActiveRecord for Ruby") by Kevin Marshall, Chad Pytel, and Jon Yurek is an advanced-level book about using the ORM database library used primarily by Ruby on Rails. To be published on September 10, 2007, the book is now ready to pre-order from Amazon.com for $26.39 (non affiliate link) and runs at 300 pages, so it's likely to be a reasonably complete reference to using the library whether with Rails or not.