I constantly get mails from various readers who are looking for Rails developers for their projects. As I don't do this myself, I have to keep giving out a list of Rails developers I know and trust or have had good feedback about. I figured I should make a blog post with a list instead, so I could point people to it, and keep it updated as a resource for everyone to use. You can even leave "review" type comments if you've used any of these guys. The list is not very long, but here we go..

(Disclaimer: None of these companies has ever paid me a cent and none requested this post.. just to be clear)

New Bamboo are my top recommendation right now. They're truly Rails rockstars. A London based team of five, New Bamboo was formed by the merging of Damien Tanner's New Bamboo Rails agency and Jonathan Conway and Max Williams' Agile Evolved agency. I've found them all to be great people and they clearly know what they're talking about when it comes to Rails. One of the things that sets them apart from most Rails agencies is their attention to design, which, dare I say it, is very up to date and Web 2.0 oriented ;-) They also have an impressive client list (e.g. Ma.gnolia, Engine Yard, Scholastic) and take on international work. 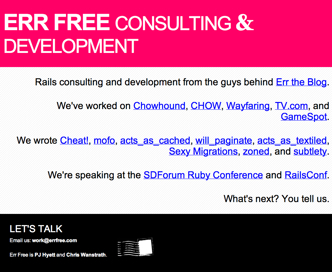 Err Free is a new Rails consulting and development company formed of PJ Hyett and Chris Wanstrath. These guys have totally attained Rails guru status with their solid work for CNET and various Rails plugins and new techniques (such as Sexy Migrations or Mofo). They both decided to leave and form a consultancy of their own.. Err Free. This is a new entry but the stature of these guys makes it a solid one in my list now.

Patched Software is made up of Gregg Pollack and Jason Seifer, the guys behind the excellent Rails Envy blog. They're based in Florida.

IncrediblInc are a three-man UK based Rails development agency co-founded by Max Niederhofer and Alan Bradburne. I believe Alan Bradburne also takes some independent Rails work on board too. People I've recommended to him have come back saying great things. Some clients seem to prefer having a single, independent developer rather than put things out to an agency, so you might want to give Alan a try if so. His site is not particularly business oriented, but his contact details are on the right.

Missing Method is a small Web development agency that specializes entirely in Ruby on Rails applications. Bruno Bornsztein is the one at the helm, and their latest project, Curbly, is particularly impressive as a Rails-powered DIY community. Bruno is a great Rails developer, and Ruby Inside interviewed him a couple of months ago.

These are only my current recommendations, so if you have a Rails development agency or want to post a review of any of those above, please comment and hopefully this post can become an even more useful resource in the future.