The Mega RailsConf 2008 Round Up

RailsConf 2008 - the primary conference for Rails developers - took place over the last few days (May 29th to June 1st, 2008). By all accounts, everyone had a great time, but not everyone could attend so here's a casual roundup of what happened. 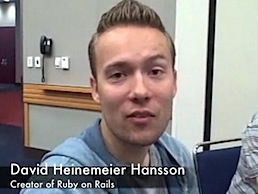 Note: You can download the presentation files used by some of the speakers from the official RailsConf site.

DHH Keynote: Thanks to Daniel Wanja, you can watch David Heinemeier Hansson's keynote presentation. It's a bit of a shaky video and only made up of extracts, so it jumps a bit too. I imagine a better video will be available soon. Essentially, DHH moves from technical concerns to becoming a self-help and health advisor.

Getting Git: Scott Chacon did a talk on "Getting Git". It perhaps sets the record for number of slides at 520 covered in 55 minutes.

The Other mod_rails - Deployment with JRuby: Nick Sieger did a presentation about using JRuby to deploy Rails applications.

Pastie: Josh Goebel did a presentation about the popular Pastie source-code-pasting site.

Advanced RESTful Rails: Ben Scofield covers the use of REST with Rails and includes lots of simple code examples. Perhaps the slides lack a lot of what happened in the presentation, but this seems like basic REST stuff than "advanced" so it's well worth a read even if you don't use REST yet.

Scaling Ruby from the Inside Out: Ezra Zygmuntowicz on scaling Ruby, and Vertebra a new "next generation cloud computing / automation framework."

Railsconf in 36 Minutes: Not a presentation, but roving reporter Gregg Pollack went around and asked a lot of the presenters to summarize their talks in 30 seconds. It makes for a great summary of the conference. It features the interviews linked above too.

Lightning Talk Summaries: A summary of the lightning talks given at the conference.

The RailsConf Message Board 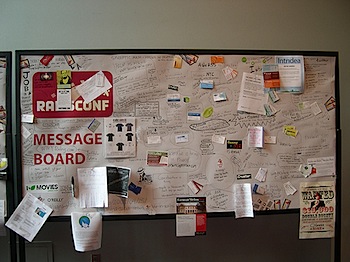 It seems to be a tradition at Ruby / Rails conferences to put up a big "message board" for people to write / graffiti on as they see fit. RailsConf 08 was no exception. Vinícius Manhães Teles has taken a great high-resolution picture of the board. Messages include promotion for a new Gem called gitjour, codesmack.com t-shirts and a crazy number of requests for Rails developers (Zappos.com, Engine Yard, AideRSS, Synaptic Mash, Grockit, XMinute and Intridea are all hiring!).

Rails 2.1 Launched: Rails 2.1 was officially launched. More about this on Ruby Inside in the next couple of days!

Quick RailsConf Update by Josh Susser. On the Joel Spolsky keynote: "If you missed it, count yourself lucky."

RailsConf - the retrospective by Eric Gelinas

RailsConf08: Meta-programming Ruby for Fun and Profit by Nate Murray

Notes from the JRuby Q & A by Nick Sieger

Feel free to post any links, references, or notes of your own regarding RailsConf 2008!