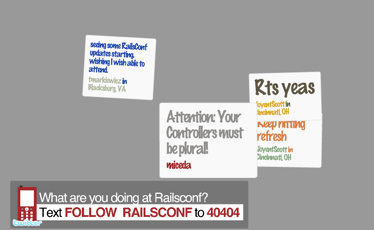 Twitter is a current flavor of the month Web 2.0 site where you can post small messages and receive small messages sent by other people online or via SMS. It's pretty cool and it's become extremely popular in the last few months. Lots of Rails and Ruby developers are using it to keep each other in the loop with what's going on in their lives. This, coupled with the ability to read "up to the second" messages about what's going on and the start of RailsConf today, means it's an ideal candidate for a Flash visualization of on-the-fly RailsConf updates. One particularly cool feature is that you can click on the Flash and have it go full screen (Note: Flash Player 9 is required).