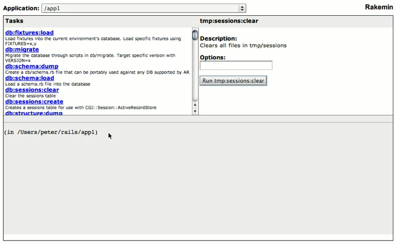 One of my clients has a multi-application rollout system in place that operates on Rake tasks (Capistrano wasn't viable). The Rake tasks are centralized with the application and need to be run from the deployment boxes. As their developers aren't au-fait with the command line, they wanted an easy way to run Rake tasks on arbitrary applications over the Web. I decided I could write a tool to do this, and I have.. it's called Rakemin.

It's all AJAX, quick, and all you have to do is specify the 'base directory' where all of your Rails applications live, and it'll hunt out all the projects for you. These are made available from a drop down menu at the top of the screen, and upon selecting an app, the rake tasks appear in the left hand window. To run a task, click on it, type in any options you might have, and press the button. Results appear in the bottom 'console' window. This will be perfect for them to do their rollouts, as it means everything is centralized, so all developers will be using the same system (rather than quirky local variants).

It's pretty new, so it's not ready for me to release the source yet, but I'm just wondering if it's anything anyone would be interested in. It'll get released eventually, but if people are interested, I'll try to get a beta build publicly available sooner.

There's a hideously low res video demonstration next.. (note, this demo video was for the client, so it's not that slick ;-))