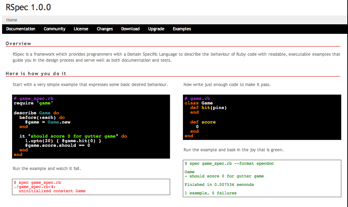 The RSpec development team have just announced the release of RSpec 1.0, the first major version of what has become a popular "Behavior Driven Development" library for Ruby.

If you're fresh to RSpec, check out the official home page for a compelling example, or straight from the mouths of the RSpec team:

RSpec provides a Domain Specific Language for describing and verifying the behaviour of Ruby code with executable examples.

Some people like to call these examples "tests". In fact, they are. But we believe that tests have equally important value as documentation and as a design aid, and that the testing nomenclature and syntax in most unit testing frameworks keep too much focus on only the testing value, and hide the design and documentation value.

40 contributors have been involved with RSpec, along with 5 core developers, making RSpec one of the most popular collective Ruby projects.