For some examples of the above, however, read on.

You can watch the video on Vimeo or see the slides on SlideShare. Alternatively, you may see the video embedded above.

Yugui's talk was only short but the key points were that:

I've cherry picked a few changes in 1.9.3 to highlight.

Recently, I wrote all about the load.c file loading performance saga in Ruby 1.9.2. These issues have begun to be addressed and a nifty patch has enabled Ruby 1.9.3 to post significantly improved loading times for apps with large trees of files to load. You could see anywhere from a 5% to 40% reduction in load times for your apps.

Among some changes to the String class are a couple of new methods. First, prepend:

String#prepend prepends one string to another, in-place. The result is equivalent to using a[0,0], in this case.

Next, byteslice will let you get access to sections of a string at the byte (rather than character) level:

The Random class now accepts ranges on its rand class method. In 1.9.2, this was only allowed on its instance method. For example:

A side effect of this is that Kernel.rand now also supports ranges in 1.9.3. For example:

#__id__ moved from Object to BasicObject

BasicObject is the new grand-daddy of the inheritance tree in Ruby 1.9 and in 1.9.3 it gains access to the functionality of the object_id method by way of __id__ which has been moved into BasicObject from Object. This may help those of you using BasicObject for delegators, proxies, and the like.

If you want to pick up on more changes, see the Ruby 1.9.3 NEWS document or, perhaps, check out my Ruby 1.9 Walkthrough screencast ($16) which has an entire section dedicated to things that are new in Ruby 1.9.3.

In her talk, Yugui mentioned two extra production releases of Ruby to come after Ruby 1.9.3. The first was unnamed and was said to be a 1.9 release with minor language changes to 1.9.2/3. In the Q&A, someone asked Yugui if this would be called Ruby 1.9.4 but she said it was still under discussion but hoped it would be called 1.9.4. This unnamed next release would, however, have complete backwards compatibility for code written in Ruby 1.9.2/3.

The second release after 1.9.3 "should be called Ruby 2.0", however. It will have significant changes but Yugui notes that "it should be comfortable with 1.9.3" and that you should be able to "safely switch" to 2.0, indicating that any significant changes wouldn't involve removing core language elements or permanently changing core syntax features.

It has previously been said, however, that Ruby 2.0 could be "several years" away, so don't get too excited about this yet. Now is the time to start weighing if you want to influence Ruby 2.0's design, however!

Still getting to grips with Ruby 1.9? Try my walkthrough 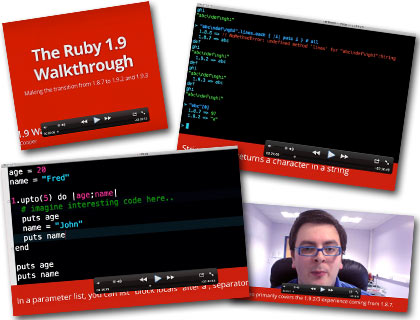