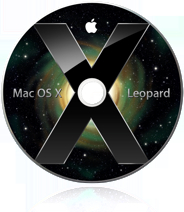 Someone / some people who have been responsible for integrating Ruby and Rails into the latest version of Mac OS X (Leopard) have written some notes on what was involved and how Ruby and Rails work in Leopard. The Ruby build is a customized 1.8.6 p36 and actually integrates into Xcode and Interface Builder.. now making it a relatively easy task to put together Ruby GUI apps on OS X. RubyGems is also installed with a smattering of the most popular gems preinstalled by default.