Ruby and Rails on Emacs Screencast 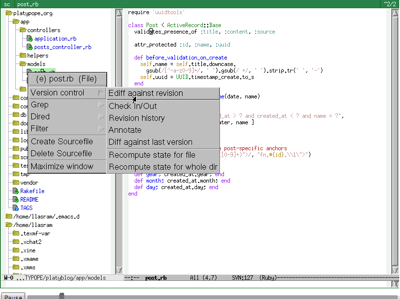 Those of us who primarily develop Rails applications on OS X are mostly familiar with TextMate, a great, powerful and stylish editor that seemingly entices more Rails developers over to the Mac platform every day (judging by the comments on the #rubyonrails IRC channel). However, another option available to all platforms is the GNU Emacs editor, an open source Emacs-based text editor that's been around since the computer dark ages.

Marshall Vandegrift has put together a compelling screencast of his Emacs setup which sports as many, if not more, features as TextMate, and is just as powerful. He has syntax coloring for Ruby and erb, a project view, and built-in links to tools such as svn and diff. He also blogs about Emacs and Ruby here.