“Ruby” Becomes 4th Most Popular Girl’s Name in the UK 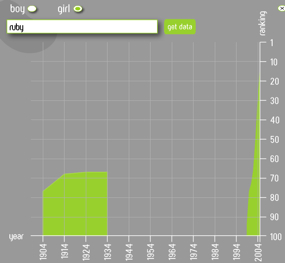 Christmas Day deserves a frivolous story! How about the incredibly rapidly growing popularity of the name "Ruby" in the UK? Reasonably popular until the mid 1930s, the name dropped off the charts until around 2000. Since 2002 the name has leaped from the 70th most popular girl's name up to 4th!

Have any Ruby developers or evangelists named their daughter Ruby in celebration of the language? If you're bored with your turkey already, do drop a comment. Regular programming resumes on December 27.