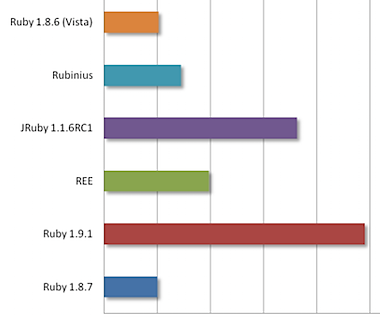 Back in December 2007, Antonio Cangiano presented The Great Ruby Shootout, a large set of benchmarks of then-current Ruby implementations (Ruby 1.8.5, YARV - early Ruby 1.9, JRuby, Ruby.NET, Rubinius, XRuby, and Cardinal). Even then, despite Ruby 1.9's infancy and experimental nature, Ruby 1.9 came out as about three times faster than Ruby 1.8.5 - while other implementations were barely faster than 1.8.5.

Now Antonio has put together an all new December 2008 Great Ruby Shootout! There's a lot of reading to do but the results are very exciting. JRuby's performance has come along in leaps and bounds and Ruby 1.9.1 is around five times faster than Ruby 1.8.7. Phusion's Ruby Enterprise Edition (basically an amended fork of 1.8.6) also comes in at a surprising two-times faster than 1.8.7! Remember that Antonio's benchmarks are by no means representative of how your application might be using Ruby, but these numbers are extremely encouraging.

As well as comparing JRuby, Ruby 1.8.7, Ruby 1.9.1, Rubinius and REE, separate benchmarks were run for Maglev, MacRuby and IronRuby - all still reasonably experimental implementations. Maglev worked out at about twice the speed of 1.8 (though some operations were far slower), MacRuby offered performance equivalent to 1.8 (at this point), and IronRuby was a little slower due to its focus on .NET integration and matching the Ruby spec more closely (versus working on performance and optimizations). Make sure to head over to the article for the full results.

Antonio sums it up pretty well:

Overall I think these are great results. Ruby 1.8 (MRI), with its slowness and memory leaks, belongs to the past. It’s time for the community to move forward and on to something better and faster - and we don’t lack interesting alternatives to do so at this stage.

Now all we need is for Ruby 1.9.1 to reach final release and to see how it stacks up on the Alioth Shootout. Currently Ruby 1.8 is at the very bottom and an earlyish build of Ruby 1.9 is 9th from bottom just below Python, Perl and PHP. If the performance of Ruby 1.9 can go from 28 times slower than compiled C++ to just 18 times slower, Ruby will leapfrog these three strong competitors and one of the biggest criticisms of Ruby will become extinct.

(As an aside - is anyone familiar enough with the Alioth Shootout to run the benchmarks for the latest Ruby 1.9.1 build to see how it compares so far?)