Blink and you'd miss it, but Ruby Inside celebrates its first anniversary today. To commemorate it, I want to post about the history of the site, how it all came together, present some statistics, and give some blog-related tips for anyone else who wants to create a similar blog. 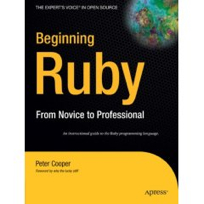 Ruby Inside was initially conceived as a promotional vehicle for my then-nascent Beginning Ruby book, now published by Apress and available from all good bookstores (and some bad ones, I imagine). The idea was to produce a blog suited towards casual or beginner Rubyists, the ideal market for the book, but as the subscriber count sharply grew through 2006, Ruby Inside gradually became a general-purpose publication for all Rubyists. Because most of my Ruby code was kept proprietary (for either commercial or shame reasons!) I decided to focus on just putting out the best "digest" blog for the whole Ruby world as my contribution back to a community that had proven so rewarding.

Ruby was a definite focus for the blog, rather than Rails. Several good Rails blogs were already going, but Ruby itself was only covered by RedHanded, a genius work but too deep for beginners, and O'Reilly Ruby, who were considered friendly "enemies" (in the sense that I was writing for a competing publisher) and whose posts were irregular and more technical than "newsy". There was a gap for a short and sweet "newsy" Ruby blog, and Ruby Inside managed to fill it.

Dated May 27, 2006, the first post was about Jeremy Voorhis' asset management plugin, but the first comment, from Slingshot's Derek Haynes, didn't come till one month later. Comments didn't really take off, except for the rare "editorial" type posts I made, like when I asked "Should Ruby Inside Make Money for the Community?", and even now they're not a significant part of the experience (although I think they add a lot when they're made, and really appreciate them).

Initially the subscriber count was low, but I kept a close eye on it using FeedBurner. Once the count passed a thousand or so subscribers (a decent amount, I reckoned), I made the subscriber count public and anyone can still check that out at the bottom ride of every page. Currently it shows 8227 readers, a number I'm extremely proud of after just one year and 500 posts.. all of you are much appreciated, so thanks!

The only spike I can explain is the one in February 2007, when FeedBurner began to accurately track the number of Google Reader subscribers. This added an instant 2000 or so subscribers.

One thing I credit with the continual growth of subscriber numbers is the provision of a :full text" feed. Most readers don't even make it to RubyInside.com, instead preferring to read with their feed browser. This gives the upsides of a very loyal readership, but has downsides when it comes to advertising or general site pageviews, although that has never been a major goal. If you're not focusing on profits, I'd always advise any blogger to use full text feeds.. it pays dividends on your subscriber figures, and a feed subscriber is far likely to be reading again tomorrow than a random Web visitor.

Ruby Inside is powered by WordPress, a PHP blogging application. This decision has proven less controversial than it otherwise could have, but it makes sense for a few reasons. WordPress is by far the most used tool for stand-alone blogs out there, it has the biggest ecosystem of themes and plugins, and it's reliable and fast. When Ruby Inside began, the only Ruby alternative was Typo, which was in relative infancy and whose deployment (at the time) would have required the infamously shaky FastCGI technique, Lighttpd, or mod_proxy_balancer.. all far more complicated than just using PHP. Deploying Rails apps is still a nightmare compared to PHP, so WordPress it is.. and I'd advise any other bloggers worried about breaking expectations to just use the tool they find best for the job.

Another important part of Ruby Inside has been the "image for every post" technique. It took a month or two for me to figure it out, but in mid 2006 I realized that in the feeds and blogs I read, the items I was drawn to the most were the ones with images, even if the post itself wasn't of significant interest on content alone. Human psychology is hard (impossible?) to beat, and so the idea of trying to include an image with almost every post was born. A lot of readers have written to me and told me this one of the features they like most, so it seems to have paid off. If you're a blogger, see if it works for you. It works well for me because I use ecto, a desktop blogging tool, and to do a screenshot on OS X is a single key-press, then I just drag the file from the desktop into a post and resize in a WYSIWYG format.. it takes seconds. Consider getting a desktop client if you want similar functionality.

The Ruby Inside format is going to stay the same for the foreseeable future. It works, and even though the site is bound to evolve, the whole regular, casual, short and newsy style seems to have something going for it. The next milestone is 10,000 subscribers, which would be mind-blowing as a demonstration of Ruby's growing popularity as anything else. Another new development is that I've begun looking into getting other people involved with Ruby Inside. While having multiple bloggers was considered from day one, no-one was (naturally) interested as there was nothing to work from. As of three weeks ago, however, I've taken on Hendy Irawan to post on a frequent basis.. you may have seen several of his posts in that time. So, welcome Hendy!

Anyway, enough blabbering from me.. thank you for reading, subscribing, and helping this site become what it has. Thank you!