Ruby Moves Up to 11th Most Popular Language 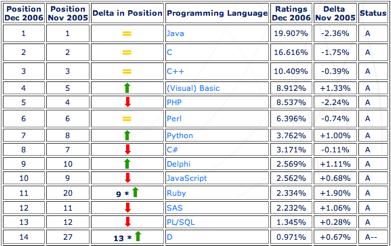 For those who are not familiar with the index:

The TIOBE Programming Community index gives an indication of the popularity of programming languages. The index is updated once a month. The ratings are based on the world-wide availability of skilled engineers, courses and third party vendors. The popular search engines Google, MSN, and Yahoo! are used to calculate the ratings. Observe that the TIOBE index is not about the best programming language or the language in which most lines of code have been written.

It is also interesting to see D chasing Ruby up the charts. I've been seeing a bit of buzz around this language lately.