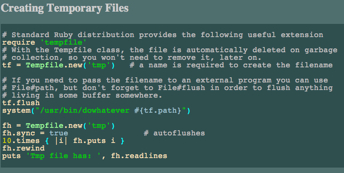 Inspired by the legendary (amongst Perl programmers anyway!) Perl Cookbook, comes the Ruby Cookbook. It has the equivalent examples from the Perl Cookbook but in Ruby form, of course. The basic sections are mostly complete, although some of the later sections are barely covered yet. Still, if you want to see the basic recipes for dealing with strings, numbers, dates and times, arrays, hashes, file I/O, process management, and so on, it's a cute little resource.